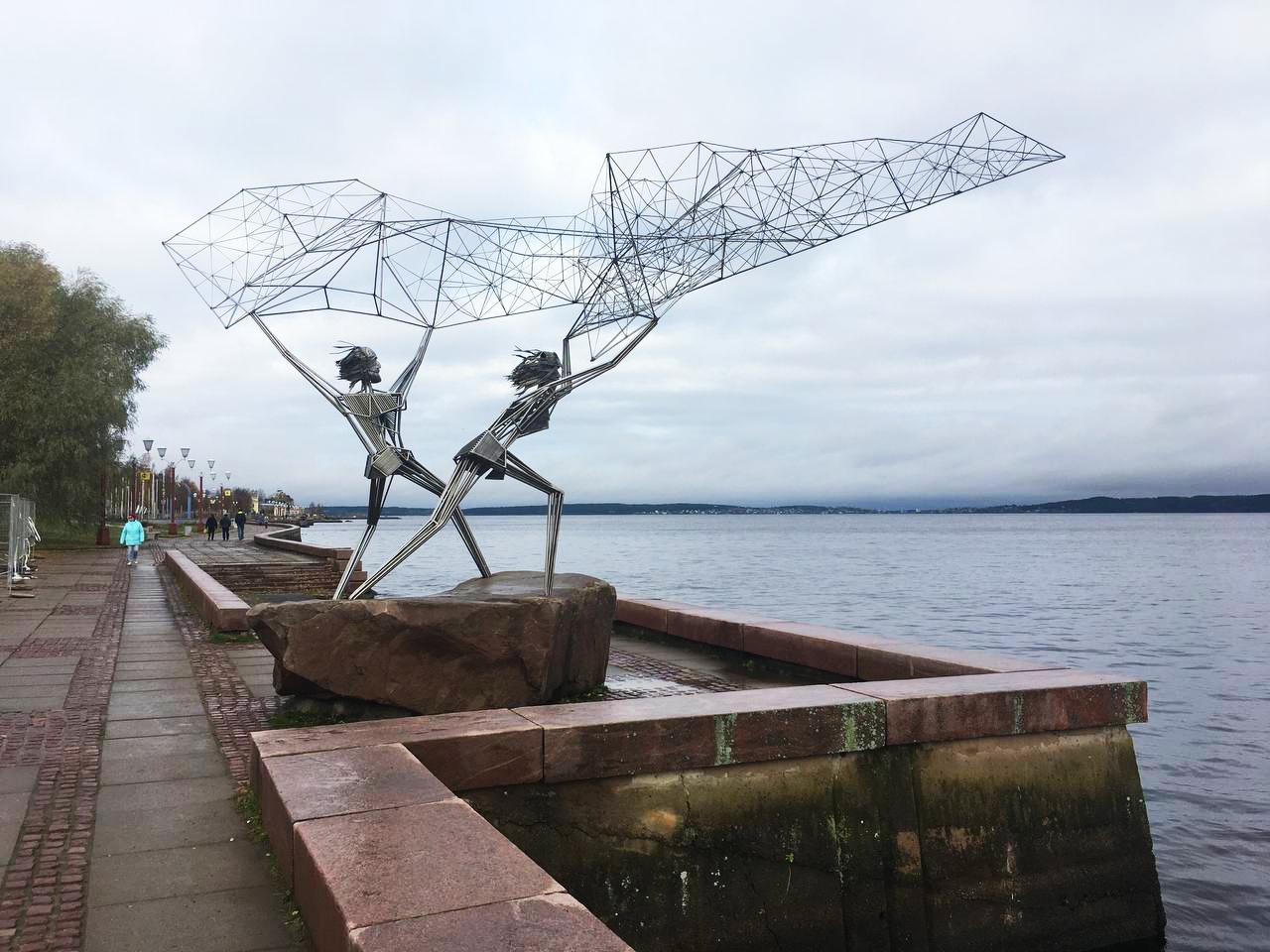 Itinerary
1 day
Welcome to Saint-Petersburg - the "Nothern capital of Russia"! Your personal guide will meet you at the arrival hall and your royal holidays have begun!
Your unforgettable tour will begin with a sightseeing tour of Saint-Petersburg. You will find yourself in the center of the amazing Peter's era, which turned Russia into a hospitable secular state, with developed sciences, crafts and trade, with independent diplomacy and a strong fleet. You will recognize Saint-Petersburg as a sea city - you will see the Admiralty, in the place of which the first Russian ships once descended from the stocks. Admire the magnificent embankments of the beautiful Neva - the front facade of the city, along which the first palaces were built. You will see the Summer Garden - the predecessor of the brilliant Peterhof. You will drive along the famous Nevsky Prospect, where, in addition to mansions and old shops, churches of all Christian confessions are located - after all, Peter the Great opened the doors of the new capital for foreign guests, and first of all for talented architects. You will see the creations of European architects who later made Saint-Petersburg one of the most beautiful cities in the world: Palace Square with the General Staff Building and the Winter Palace, St. Isaac's Cathedral on St. Isaac Square, a monument to the founder of the city "The Bronze Horseman" on Senate Square, the Spit of Vasilyevsky Island with the Exchange building, where the first city port was located, the Marble Palace, Mikhailovsky Castle, the Smolny Monastery ensemble.
After the sightseeing tour, your guide will help you to check-in at the hotel (after 14.00). You can rest and relax, as well as have a lunch or a dinner on your own in one of the nearby restaurants - your guide will be happy to tell you where to go.

2 day
Breakfast at the hotel restaurant, check out.
After breakfast you will have a country excursion to the brilliant Peterhof - the "capital of fountains" and the favorite residence of Peter I. In splendor and richness of decoration, Peterhof surpassed its prototype - French Versailles and became the most beautiful palace and park ensemble in Europe. You will get acquainted with the history of the creation of this man-made miracle, admire the most famous fountains and cascades, learn the engineering secrets of its construction, walk along the shady alleys of the Lower Park, and also admire the panorama of the Gulf of Finland.
You continue your tour with an excursion to Tsarskoe Selo with a visit to the Catherine Palace. Like Peterhof, Tsarskoe Selo was the favorite ceremonial summer residence of the Russian emperors. Laid down by the wife of Peter the Great, it reached its heyday during the reign of the next two sovereigns - Peter's daughter Elizabeth and the world-famous Empress Catherine II. The Catherine Palace is one of those places where the luxurious XVIIIth century still lives. Lush decoration, an abundance of gold, carvings and paintings, an endless golden enfilade of state rooms, spatial scope - this palace was born for the organization of grandiose holidays designed to emphasize the power of the Russian monarchy in the eyes of foreign ambassadors. And once inside, you, without a doubt, feel like a noble special era of Enlightened absolutism in Russia! It is in this palace that the famous Amber Room is located, which was recreated from oblivion by Saint-Petersburg for the 300th anniversary of Saint-Petersburg.
Upon return from suburban excursions, your guide will offer you to make a walking trip along a city center and open Saint-Petersburg by yourselves.
In the evening you will be accompanied to the railway station and you will get a night train to the town of Petrozavodsk in Karelia. You will spend one night in train.

3 day
Welcome to Petrozavodsk - the capital of the Republic of Karelia! Your guide will meet you at the railway station and will recommend you where you can get a brekfast. After that you will go for a sightseeing tour of Petrozavodsk.
The city was founded by Peter the 1st and it’s an essential part of Russian history. You will get acquainted with the history of Petrozavodsk and visit it's major places of interest. You can make photoes near the monument to Peter the Great on the shore of Lake Onega.
Afternoon you will go to Kizhi Island by hydrofoil, the way takes about 1 hour and 30 minutes.
Upon arrival you will find yourself in Ancient Russia, admire the beauty of the Russian North, enjoy a walking tour along the Kizhi Open-Air Museum of Wooden Architecture. Kizhi is one of the first open-air museums and one of the most popular unique tourist attractions in Russia. The pearl of the museum is its world-known wooden church ensemble dating back to the 18th - 19th centuries which is also a UNESCO World Heritage Site since 1990.
After this excursion your guide will offer you lunch in local cafe or a lunch box.
Then you will take the way back to Petrozavodsk by hydrofoil along the picturesque Onega lake .
Then your guide will help you to check-in at the hotel (after 14.00). There you can rest and relax, as well as have a dinner on your own in one of the nearby restaurants - your guide will be happy to tell you where to go.

4 day
Breakfast at the hotel restaurant.
After breakfast in the hotel we will go for excursion to the Kivach Nature Reserve.
We will get acquainted with the second highest plain waterfall in Europe and typical and rare Karelian plants. The eco system of the Kivach Nature Reserve is unique. Apart from the picturesque landscapes you will enjoy its crystal clear air. Also you can make amazing and vivid photoes.
After lunch on the territory of Kivach reserve we offer you to visit the first Russian spa - Marsial Waters Spa, founded by Peter the Great in the 18th century. The water, rich with iron, was discovered in the area in the 18th century and Peter the Great ordered to erect the first Russian spa on this territory. In the Soviet time it was the best sanatorium in Karelia and till today this is a very popular place. Of great importance are not only the healing springs, but also the tranquil atmosphere and unique microclimate of the area. You can taste water from 3 healing springs. Then you will visit an ancient Church of Apostle Peter built in 1721 at the decree of Peter the Great, according to his design and drawings.
Transfer back to Petrozavodsk.
In the everning you can walk along the city center by yourself or stay and relax at the hotel.

5 day
Breakfast at the hotel restaurant, check out.
After breakfast and check-out we invite you to go to the mining park of Ruskeala. The road will pass among the picturesque landscapes of Karelia and will take you about 3,5-4 hours.
Ruskeala mining park - the basis of the complex is an object of cultural heritage, a historical monument - a former marble quarry filled with groundwater. During excursion you learn how the Marble Canyon came into being and the most significant moments of its three-century history. You will see its sheer cliffs and emerald lakes, you can try extreme entertainment and see the picturesque Ladoga Lake.
We continue this day by a visit of an ancient Karelian village Kinerma - a unique complex monument of the folk wooden architecture of Karelia of the 19th century. A local resident will meet you and show the main sights of the village, which are houses of the end of the 19th century and the wooden chapel of Virgin Mary of Smolensk erected in the 17th century. After the excursion you will be invited to have lunch in a Karelian house.
After excursions you will turn back to Petrozavodsk and guide offer you a free time in the city center to buy some souvenirs or to have a dinner brefore departure to Saint-Petersburg. The guide will accompany you to the railway station. You will have a night train to Saint-Petersburg.

6 day
Morning arrival in Saint-Petersburg. Meeting with the guide on railway station. Free time for breakfast in the city center.
After that you will have an excursion to the Peter and Paul Fortress - to the "heart" of the city, the place from which the history of Saint-Petersburg began. You will walk through the territory of the fortress and hear the history of the construction of this structure, see the first triumphal gates and the only city gates overlooking the Neva, see ancient buildings, casemates and the most unusual monument to the founder of Saint-Petersburg. You will visit the Cathedral of the Holy Apostles Peter and Paul and see the burial place of the main representatives of the Romanov dynasty, from Peter I to Nicholas II and his family.
Then you continue your journey by a guided tour to the Hermitage - one of the largest museums in the world. The Hermitage was founded as a personal collection of Empress Catherine II, who, wishing to establish herself as an "enlightened empress", began collecting works of art. Painting experts, European scholars, collected and bought collections of paintings for the Russian empress, and soon Russia accumulated enormous wealth - a collection of works of Western European old masters. For a long time, the museum remained closed to the general public, and became public only in the middle of the XIXth century. Now his collection numbers over 3.5 million items. Among them are paintings by Leonardo da Vinci, Rembrandt, Rubens, Van Dyck, Velazquez, Goya, Watteau, Poussin, Gainsborough, antique sculpture, Egyptian antiquities and much, much more.
After excursions your guide will accompany you to the hotel for accommodation (check-in after 14.00). You can take a rest at the hotel or, if time permits, we recommend you to visit the folklore performance in the Nikolaevsky Palace.