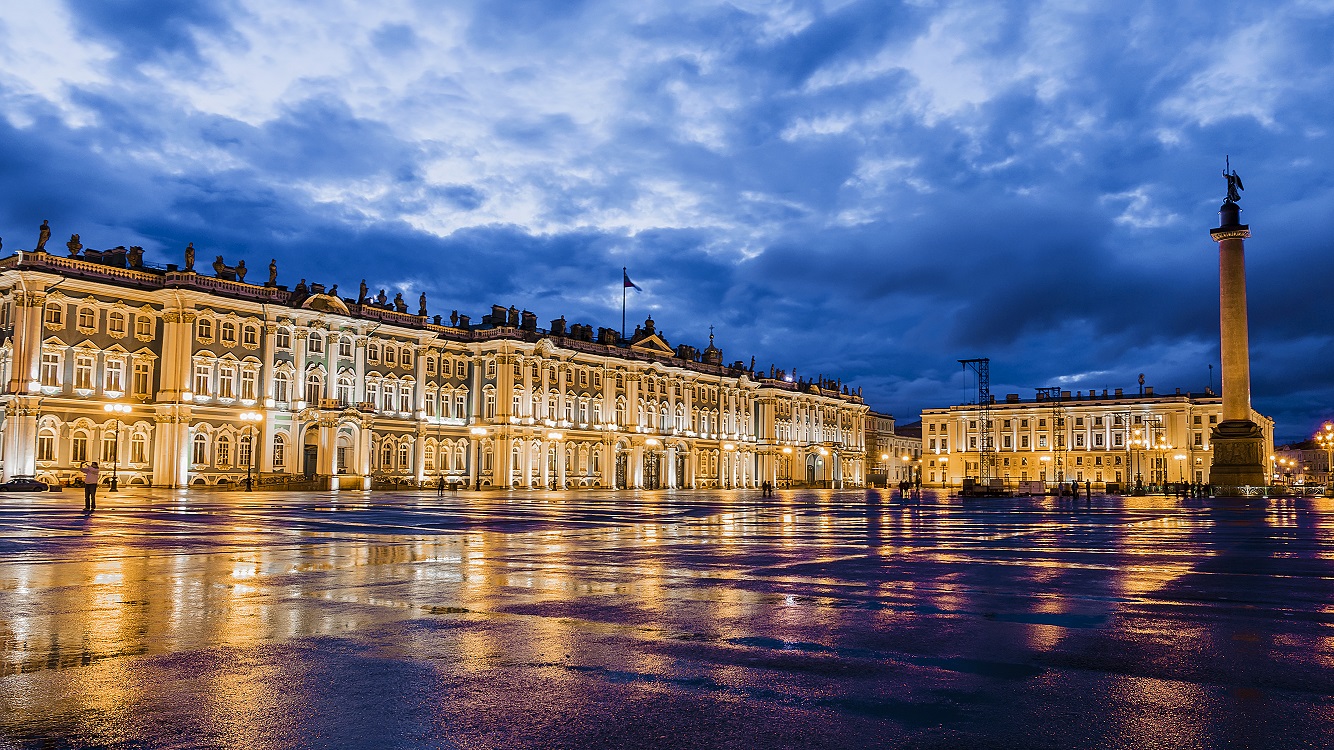 Recommended period: all the year round
Main sights: sightseeing tour, the Hermitage (the main museum complex), the General Staff building, the Alexandrinsky Theater, the Catherine Palace and park in Tsarskoe Selo, the Museum of Music in the Sheremetyevsky Palace
Accommodation: 4*
Meals: breakfast
Transport: comfortable air-conditioner car/minivan/minibus

Itinerary
1 day
Welcome to Saint-Petersburg - "The Northern capital" of Russia!
Your guide will meet you at the airport or at the railway station and you will go for a sightseeing tour of Saint-Petersburg, which introduces the long history of the Northern capital.
You will admire the panorama of the beautiful Neva, see magnificent ensembles of the central squares, drive along the central avenues and streets of the city. Everything that attracts guests from all over the world will appear to your attention: Nevsky Prospect, Kazan Cathedral, a monument to Catherine II, the Admiralty, Senate Square, 'The Bronze Horseman" monument, St. Isaac's Cathedral, the monument to Nicholas I, the Winter Palace, Palace Bridge, Spit of Vasilyevsky Island, Kunstkamera, Old Stock Exchange, Rostral Columns, Menshikov Palace, Peter and Paul Fortress, Trinity Bridge, the church of the Savior on Spilled Blood, Summer Garden, Marble Palace, Mikhailovsky Castle, the Field of Mars and other famous attractions.
After that your guide will help you to check-in at the hotel (after 14.00). And you can rest and relax, as well as have lunch or dinner on your own in one of the nearby restaurants - your guide will be happy to tell you where to go.

2 day
Breakfast at the hotel restaurant."
After breakfast your guide will invite you for an excursion to the Hermitage - one of the largest museums in the world. The Hermitage was founded as a personal collection of Empress Catherine II, who, wishing to establish herself as an "enlightened empress", began collecting works of art. Painting experts, European scholars, collected and bought collections of paintings for the Russian empress, and soon Russia accumulated enormous wealth - a collection of works of Western European old masters. For a long time, the museum remained closed to the general public, and became public only in the middle of the 19th century. Now his collection numbers over 3.5 million items. Among them are paintings by Leonardo da Vinci, Rembrandt, Rubens, Van Dyck, Velazquez, Goya, Watteau, Poussin, Gainsborough, antique sculpture, Egyptian antiquities and much, much more. You will not only see the famous masterpieces, but also learn how the rulers of the Russian Empire lived in the 18th-19th centuries, because the main building of the Hermitage - the Winter Palace - until 1917 remained the main Winter residence of the royal family.
Then you will visit the General Staff building, where you can get acquainted with the works of the Impressionists and Post-Impressionists, as well as with the works of artists of various schools and trends. Personal exhibitions of legendary creators: Van Gogh, Renoir, Gauguin, Monet, Picasso, Kandinsky deserve special attention.

3 day
Breakfast at the hotel restaurant.
After breakfast you will go on a fascinating excursion to the glittering Alexandrinsky Theater, an exclusive tour for connoisseurs of theatrical art. You will have a rare opportunity to see the historical interiors and the auditorium through the eyes of artists, stroll through the Carriage Gallery and foyer, and visit the exposition of the Museum of Russian Drama, where you can see a huge number of theatrical costumes and various props.
You will visit the magnificent Catherine Palace - one of those places where the luxurious XVIIIth century still lives, with its magnificent balls, nobles drowning in diamonds, colorful masquerades and fiery fireworks. Lush decoration, an abundance of gold, carvings and paintings, an endless golden enfilade of state rooms, spatial scope - this palace was born for the organization of grandiose holidays designed to emphasize the power of the Russian monarchy in the eyes of foreign ambassadors. It is in this palace that the famous Amber Room is located, which you will see: it was stolen during the Great Patriotic War and recreated from oblivion by Saint-Petersburg restorers for the 300th anniversary of Saint-Petersburg.

4 day
Breakfast at the hotel restaurant, check out.
After breakfast, we will invite you to visit the museum of Music in the Sheremetev Palace, where you can get acquainted with the largest collection of musical instruments from around the world in Russia. Also, in the halls of the Sheremetev Palace, you can see items from the Sheremetev collections, as well as paintings and decorative and applied art of the 18th–19th centuries that came to the museum over the past quarter of a century.
After excursion you will have time to stroll through the souvenir shops and shops of Nevsky Prospekt and buy gifts for friends and relatives.
Then the guide will take you to the airport or railway station.

• accommodation in Saint-Petersburg 3 nights with breakfast, registration fee
• the Hermitage (the main museum complex), the General Staff building, the Alexandrinsky Theater, the Catherine Palace and park in Tsarskoe Selo, the Museum of Music in the Sheremetyevsky Palace
a backstage tour of the Alexandrinsky Theater and the exposition of the Museum of Russian Drama
• comfortable air-conditioner car/minivan/minibus
• licensed English speaking guide