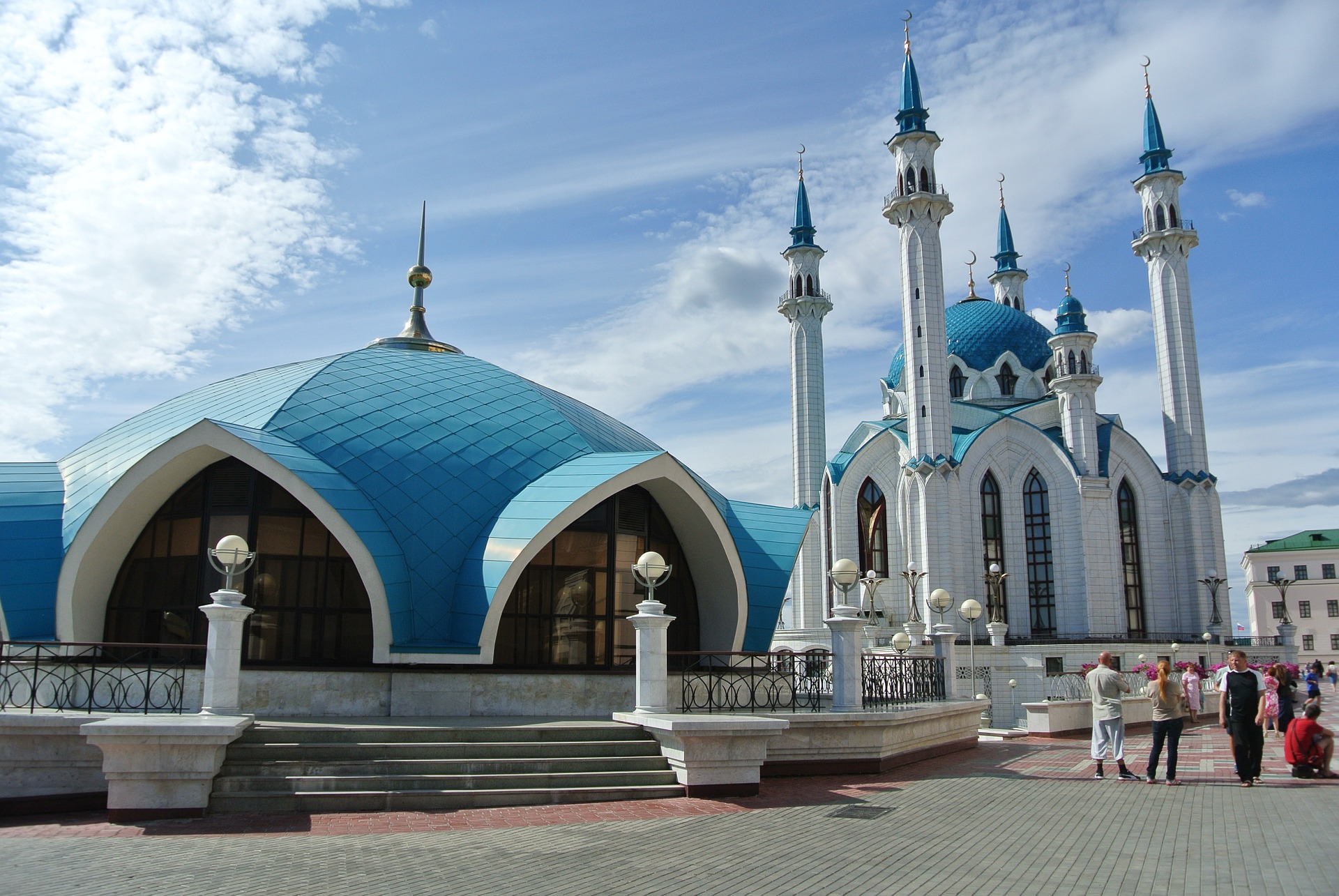 Itinerary
1 day
Upon arrival at the airport or railway station in Moscow, you will meet with your personal guide.
Your journey will begin with a sightseeing tour of Moscow. You will pass along the famous embankments and streets of the historical city: Boulevard and Garden Ring, admire the most beautiful panoramic views of the Kremlin from Sofiyskaya Embankment, see the Bolshoi Theater and Manege, Lubyanka, Slavyanskaya and Theater Squares, the legendary "Stalin's High-Rises", which are often called "Seven Sisters", the most beautiful fountains and masterpieces of architecture of the Exhibition of Achievements of National Economy, Ostankino tower, Kutuzovsky Prospect, Triumphal Arch, Victory Park on Poklonnaya Hill, Victory museum, golden domes of the Cathedral of Christ the Savior, Patriarchal bridge, Swan pond near the walls of the Novodevichy Convent, the observation deck on Sparrow Hills, the building of Moscow State University, Luzhniki stadium, modern Moscow-City skyscrapers and much, much more.
After the sightseeing tour your guide will take you to the hotel and help you with accommodation.
In the evening, you can have a walking trip around the evening city and taste Russian cuisine in one of the cozy restaurants of the city.

2 day
Breakfast at hotel, check-out.
After breakfast your guide will meet you in the hall of the hotel and you will go for an excursion to the Moscow Kremlin, which located on its territory unique monuments of architecture and art of the 15th - 20th centuries: temples, churches and chambers, magnificent palaces and front office buildings. You walk along Kremlin squares and streets, see the "Tsar Bell" and "Tsar Cannon", visit Sobornaya square and one of the cathedrals: Uspensky, Arkhangelsky or Blagoveshchensky.
You walk along Red Square and the Alexander Garden. You will walk along the famous cobblestones of Red Square, see the multi-colored domes of St. Basil's Cathedral, the monument of medieval Russian architecture "Frontal Place", the Church of the Kazan Icon of the Mother of God, the State Historical Museum, the Lenin's Mausoleum, the GUM building, enjoy the splendor of the panorama of the ancient Kremlin from Sophia embankment of the Moscow River.
You will see a new landmark of the city - Zaryadye Park, stroll along the alleys of the Siberian coniferous forest in the very center of Moscow, visit the famous Soaring Bridge - a magnificent observation deck hanging right over the Moscow River!
At the end of the day, you will go to the railway station, in order to take the night train to one of the most picturesque places in Russia - the capital of the Republic of Tatarstan, Kazan. A night on the way in a comfortable compartment awaits you.

3 day
In the morning you will arrive at the Kazan railway station, where you will be met by a personal guide who will offer you free time for breakfast. Then you will have a sightseeing tour of the ancient Kazan.
Then you will go on a bus sightseeing tour. You enjoy the original beauty of Kazan, see the bright colors of its streets and squares with your own eyes, learn where teeming treasures of Khans of Kazan are kept. The sites of the millennium-old city combine the culture of the West and traditions of the East: Old Tatar Settlement where Tatar residents lived from the 16th century, Textiles Settlement originating as a result of industrial reforms by Peter I, fountain squares, Kaban lake with its mysteries and legends, a simulated Tatar village Tugan Avylym (My Native Village), Farmers' palace with a 20-meter bronze tree, a new building of the Puppet Show, Kazan Federal University, Liberty Square as a cultural and administrative center of Kazan. During the sightseeing tour, you will see a variety of minarets and cupolas, crescents and crosses, which is proof of the good neighborliness of the two native peoples – Tatars and Russians.
Then the guide will take you to the hotel, where you can regain strength to continue your journey. The guide will also recommend restaurants where you can taste the national dishes of Tatar cuisine.

4 day
Breakfast at the hotel.
Departure for the excursion to the Island Town of Sviyazhsk. Sviyazhsk is a historical and cultural gem of the Republic of Tatarstan. At present, the place where an ancient fortress used to be is surrounded by waters of Volga river. In the past, the fortress served as a military outpost in the Volga region and a place to prepare troops for an assault against an unassailable fortress of Kazan. In the course of time, as its value as a military facility diminished, Sviyazhsk became a spiritual center of the Middle Volga. The sightseeing tour in Sviyazhsk comprises unique monuments of history: the Cathedral of the Joy for All Who Grieve, one of the oldest wooden temples of Russia – the Holy Trinity Church, an operating Assumption Monastery featuring an architectural ensemble of the 16th-17th centuries, Stable Yard, workshops.
Then you will continue your tour with the visit to the Raifa Virgin Monastery.
The Raifa Virgin Monastery located 30 Km from Kazan in a sanctuary forest, on a bank of an enchantingly beautiful lake. The monastery was founded in the 17th century. Its architectural ensemble, one of the most magnificent in the Middle Volga, was shaped for centuries. The main relic of the monastery is a wonderworking Georgian image of the Most Holy Virgin (17th century).
By the end of the day, the bus will return you back to Kazan, where you can relax in the hotel or take a walk on your own around the evening city or we recommended you visit a unique program "Rich Landlord’s House" and learn more about the traditions of Tatarstan.
EXTRA CHARGE You will be certainly invited to visit to the main house of the Tatar village - Rich Landlord’s House. Wealthy owners of the house will reveal many secrets from their way of life, customs and traditions of the Tatar people. Then you will be invited for a national dinner and will know about the favorite dishes of the Tatar people through legends and fairy tales. A fascinating story in musical accompaniment will reveal interesting elements of national holidays of the summer and winter solstice - Navruz, Nardugan, Sabantuy and other holidays.

5 day
Breakfast at hotel, check-out.
In the morning you can get acquainted with ancient town of Bolgar - one of the main attractions of the republic. You will see one of the most significant construction added to the contemporary collections of the architectural heritage of Tatarstan – Ak Mechet (the White Mosque).
During the walking tour, one can walk along the remains of white-stone walls of ancient buildings to imagine the life thriving there many centuries ago… See all the landmarks remaining in the territory of the ancient town site: Congregational Mosque, East and North Mausoleums, Khans’ Mausoleum, Minor Minaret, Black Chamber, White Chamber, Khans’ Bathing House, Khans’ Palace. Visit the Memorial Sign built to commemorate the official adoption of Islam by the ancient Bolgars, where the world-biggest printed Quran is kept.
You will end this day with a walking tour along Bauman street (so-called "Kazan Arbat") - is one of the most favorite places to walk for both residents and guests of Kazan. During the tour you will make a lot of amazing discoveries: jets of fountains, belfry and Epiphany cathedral, a building of the National Bank, zero milestone, Peter and Paul Cathedral. Meet Su Anasy and learn the story of the Cat of Kazan, whose monument always attracts crowds.
In the evening of this day you will take a night train to Moscow in a comfortable compartment.

6 day
You will arrive in Moscow in the morning. At the Kazansky railway station, you will be met by a guide who will tell you where you can have breakfast. Then you will go on a tour of the unique Moscow metro.
Stalinist empire and modern high-tech, baroque and modern, classicism and art deco - all these styles have found their application in the stations of the Moscow metro. Marble and granite, bronze and crystal, smalt and porcelain, granite and labradorite, ceramic tiles and Florentine mosaics - the variety of materials used in the decoration has made our metro some of the most beautiful in the world.
Then we will go to the center of the city. You will visit one of the most famous streets in Russia - Arbat. You can plunge into the atmosphere of the past, find out where the great literary figures loved to spend their time, look at street musicians and artists, without whom it is impossible to imagine this famous street. You will have time to walk through the souvenir shops and shops of the city center and buy gifts for friends and relatives.
After that your guide will take you to the airport or railway station.