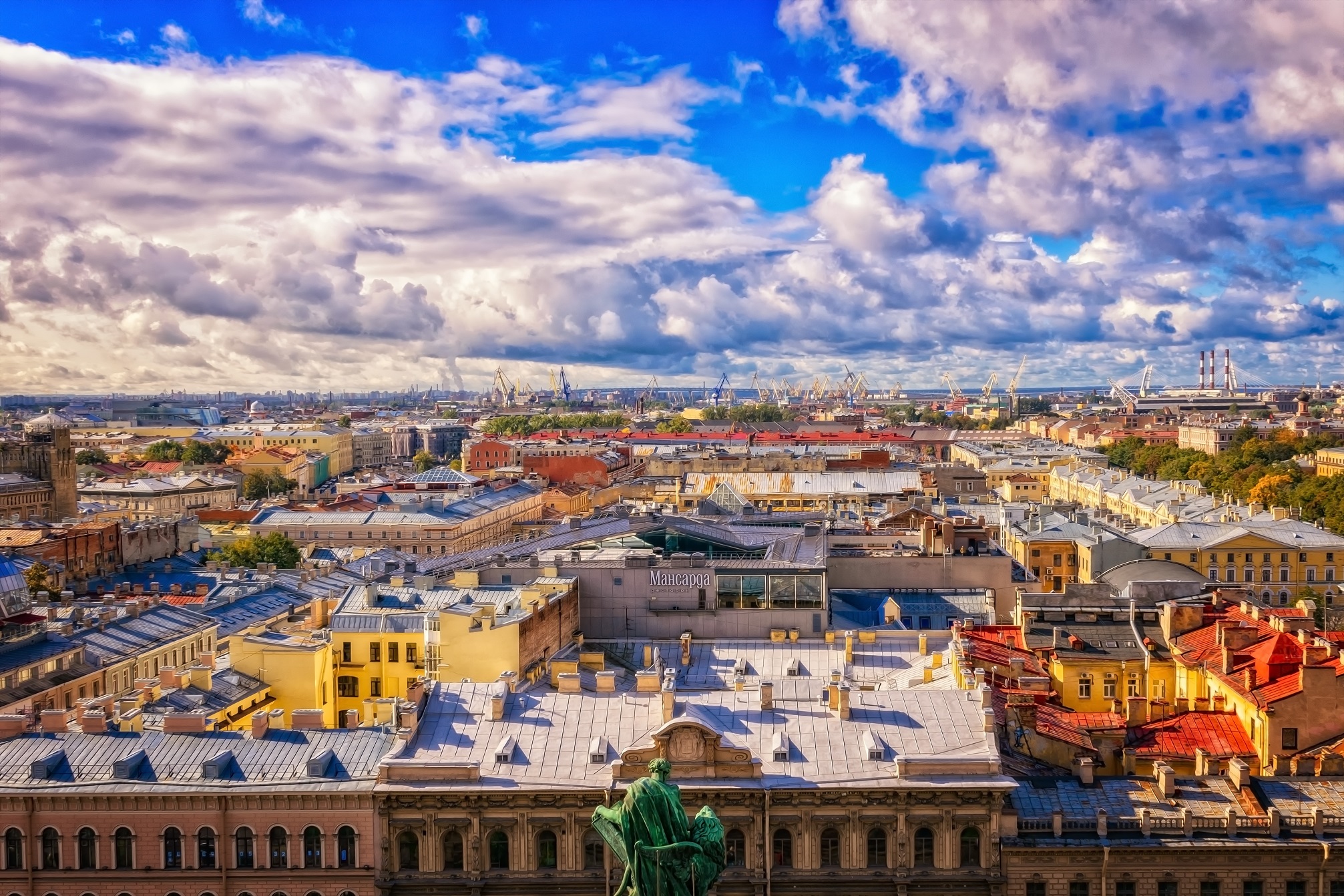 1 day
Welcome to Saint-Petersburg - "The Northern capital" of Russia!
Your guide will welcome you at the airport or at the railway station and will help you to check-in at the hotel (after 14.00). You can rest and relax, as well as have lunch or dinner on your own in one of the nearby restaurants - your guide will be happy to tell you where to go.

2 day
Breakfast at the hotel restaurant.
Departure for a sightseeing tour of Saint-Petersburg.
"The best places of interest will open to you from different viewing points. We will successfully combine a bus tour with city walks so that you can capture from the most advantageous sites such stunning views as the ensemble of the Palace Square with the Winter Palace and the Arch of the General Staff, the Church of the Savior on Spilled Blood, Mikhailovsky Castle, the ensemble of St. Isaac's Square with the monument to Nicholas I, the famous ""Astoria"" Hotel and St. Isaac's Cathedral, the masterpiece of the Art Nouveau era - old department store ""Au Pont Rouge"" on the Moika River, the Admiralty, monument to Peter the Great the legendary ""Bronze Horseman"", and, finally, the Spit of Vasilyevsky Island with a view of the Neva, the Hermitage and the Peter and Paul Cathedral.

We will also make sure that the city gets into your lenses from another impressive angle. St. Petersburg is called the “Venice of the North”, because one of its main attractions is its island location and abundance of water, which can be fully experienced only during an hour-long boat trip along the rivers and canals of the city. Palaces and residential buildings, castles and gardens, bridges and cathedrals rise above the granite embankments - the city opens up from the water in a very special way! This walk will become one of the most unforgettable experiences of your tour!
After a boat trip, you will visit the grandiose St. Isaac's Cathedral and admire its gorgeous decoration. This is the only architectural monument in which various types of natural colored stone were used on such a huge scale. Finally, we will go up to the most successful observation deck in the very heart of Nevsky Prospekt - the tower of the City Council - and capture the sights of St. Petersburg from a bird's eye view.

Overnight at the hotel.

3 day
Breakfast at the hotel restaurant.
"After breakfast your guide will invite you for an excursion to the Hermitage - one of the largest museums in the world. Now his collection numbers over 3.5 million items. Among them are paintings by Leonardo da Vinci, Rembrandt, Rubens, Van Dyck, Velazquez, Goya, Watteau, Poussin, Gainsborough, antique sculpture, Egyptian antiquities and much, much more. One of the Hermitage buildings - Winter Palace - is the former Imperial residence of the Romanovs. You will find yourself in the front part of the palace, which still remembers the noisy court life, imagine yourself as an Emperor and be able to capture one of the most impressive wonders of the Hermitage - the mechanical gold clock ""Peacock"" in the Pavilion Hall.
After a tour of the Hermitage you will travel to real fairy tale: on a hydrofoil you will cross the Gulf of Finland and find yourself in the brilliant Peterhof - the favorite brainchild of Peter the Great.
Peterhof is the ""capital of fountains"", a magical Garden with the Grand Imperial Palace. Its foot is the Grand Cascade - an incredible water extravaganza with fountains and golden sculptures sparkling in the sun. In terms of splendor and richness of design, Peterhof surpassed its prototype - the French Versailles and became the most striking palace ensemble in Europe. Unforgettable impressions from this fantastically beautiful place will remain with you for a lifetime!"

4 day
Breakfast at the hotel restaurant.
"After breakfast at the hotel you will go on a countryside excursion to Tsarskoe Selo with a visit to the Catherine Palace. Like Peterhof, Tsarskoe Selo was the favorite ceremonial summer residence of the Russian emperors. Laid down by the wife of Peter the Great, it reached its heyday during the reign of the next two sovereigns - Peter's daughter Elizabeth and the world-famous Empress Catherine II. The Catherine Palace is one of those places where the luxurious 18th century still lives. Lush decoration, an abundance of gold, carvings and paintings, an endless golden enfilade of state rooms, spatial scope - this palace was born for the organization of grandiose holidays designed to emphasize the power of the Russian monarchy in the eyes of foreign ambassadors. It isalso the palace where the famous Amber Room is located, which disappeared during the Second World War and was recreated by St. Petersburg restorers for the 300th anniversary of St. Petersburg. Until recently, taking pictures inside the Amber Room was forbidden, only a couple of years ago the ban was lifted, and now every guest has the opportunity to compete on his Instagram with the most famous photographers of the world!
Then the guide will take you to the airport or railway station.